Pair of high back armchairs. Solid oak frame and cushions upholstered with original beige fabric with brown stripes. The armrest can be removed. With manufacturer’s stamp.
In very good condition.

Pair of early high back GE-375 armchairs. Solid oak frame and cushions upholstered with original beige fabric with brown stripes. The armrest can be removed. With manufacturer’s stamp.

The armchair is very comfortable thanks to its high back, also the large armrests can be removed depending on the buyer’s taste or use. 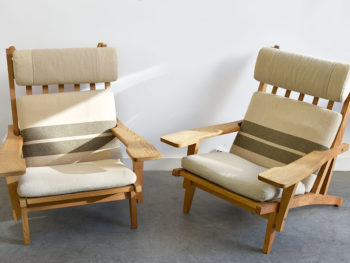