The Eameses wanted their Lounge Chair and Ottoman to have the “warm receptive look of a well-used first baseman’s mitt.”  The armchair became quickly a symbol of comfort and a mid century design icon.

The lounge chair with ottoman is a European production by Vitra from the early 80’s. It is the desirable brazilian rosewood version that is no longer in production from the end of the 80’s. The chair is upholstered with its very rare original white leather in beautiful condition with patina. The veneer of the exemplary available also shows a dark hue and a nice deep grain. Both chair and ottoman retain their original Vitra tag. A true must have for collectors! 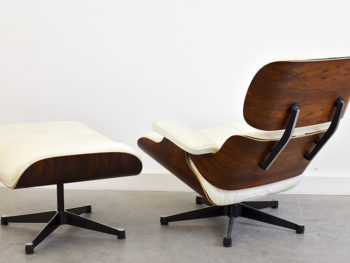