The Shogun coffee table was designed by French ceramist Roger Capron in the 1960s. The small curvy model belongs to Capron icons. The top is covered with free-form ceramic tiles in beige and green tones, on a structure and round feet in mahogany wood. The model is signed and in very good vintage condition with wear and patina on the wood. 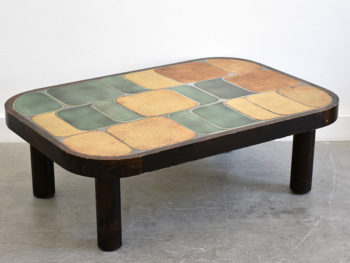