The coffee table was designed by French ceramist Roger Capron in the 1960s. The table shares the same shape and square section metal structure as the famous Navette table. The top is covered with a mosaic of ceramic tiles of honeycomb shape, whose colors vary from pink to blue-green hue. The model is signed and in very good vintage condition with visible wear. 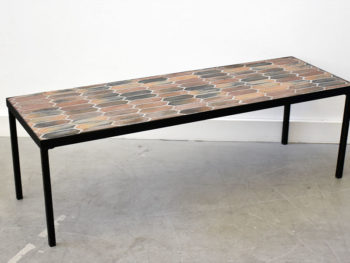